What is a HEPA filter?

HEPA stands for high-efficiency particulate air. HEPA filters provide a very high level of filtration for the smallest, as well as the largest, particulate contaminants. They send air through various pre-filters to assist with catching airborne particulate, capturing 99.997% of particles at 0.3 microns. Even when particles are smaller than this, they get captured by diffusion, meaning HEPA filters are extremely effective at capturing nanoparticles.

The significance of 0.3 microns

0.3 microns is the established Most Penetrating Particle Size (MPPS) and therefore the filtering efficiency increases for particle sizes larger AND smaller than this. A HEPA filter’s removal efficiency increases as particle size decrease below 0.3 microns. Although this sounds counterintuitive, it is a proven and accepted fact in the filtration sciences, examined in the following four filtration mechanisms. 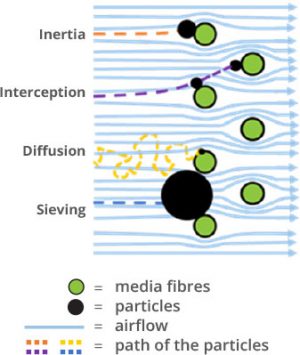 Inertia works on large, heavy particles suspended in the flow stream. These particles are heavier than the fluid surrounding them. As the fluid changes direction to enter the fibre space, the particle continues in a straight line and collides with the media fibres where it is trapped and held.

Direct interception works on particles in the mid-range size that are not quite large enough to have inertia and not small enough to diffuse within the flow stream. These mid-sized particles follow the flow stream as it bends through the fibre spaces. Particles are intercepted or captured when they touch a fibre.

Diffusion works on the smallest particles. Small particles are not held in place by the viscous fluid (air) and diffuse within the flow stream. This means that the smaller a particle is, the more likely it is to traverse the flow stream, making it more likely to collide with the fibre and be collected.

Sieving, the most common mechanism in filtration, occurs when the particle is too large to fit between the fibre spaces.

The principles behind filtration 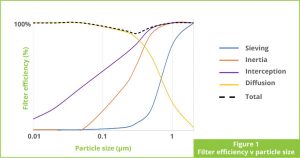 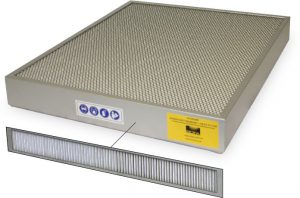 The mini pleats used in our HEPA filters can be produced with depths of up to 200mm within each pleat, depending on the application.

They are manufactured to ensure the latest manufacturing and test methods are adopted. Each filter is pleated with glue bead spacers. This feature not only guarantees even spacing for full filter coverage between each pleat but also alleviates the possibility of airflow vibration or collapse.