In May of 1960, American Engineer and Physicist Theodore (Ted) Harold Maiman (pictured) fired the first laser, a low powered ruby laser that was dubbed “a solution looking for a problem”. 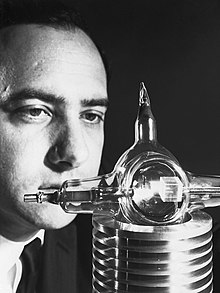 He is widely credited with the invention of the laser and that led to the subsequent development of many other types of lasers. Today, the laser is a critical part of our everyday lives.

Whether it’s powering the global internet, manufacturing our computer chips and smartphones, scanning our groceries, or enabling the technologies of the future, it is safe to say laser is no longer looking for a problem!

It is widely recognised that Maiman demonstrated the world’s first working laser. He received a patent for his invention, the Japan Prize, and the Wolf Prize in Physics. Of course, there had been a great deal of scientific research and application in the years leading up to the announcement of Maiman’s laser.

Why are lasers important?

Over the past decade, lasers have become both bigger and smaller in size, as well as more powerful and less expensive. The technology has expanded in a number of wavelengths and in the range of materials. Lasers have worked their way into everyday life and other worldly applications. The laser technology market is predicted to be worth $16.9 billion by 2024!*

Lasers have become essential to many applications and industries and the outputs feature in much of our daily life  – branding, packaging, and coding on food, beverage, confectionery, cosmetics and personal care, pharmaceuticals,

BOFA’s fume extraction is needed to sit alongside lasers for a wide range of applications. Our extraction equipment plays several important roles by capturing harmful fumes generated during production processes. Hazardous particles and gases are captured and filtered out before the clean air is circulated back into the production environment. This means the people operating the equipment are kept safe, and the process is protected (imagine if Coca Cola’s canning line had to suddenly stop because the best before dates weren’t showing clearly on the cans – that would mean 175,000 cans an hour per production line suddenly comes to a stop).

BOFA launched its first laser fume extraction product in 1999 and went on to develop what we now know as the ADVANTAGE (AD) range, which launched in 2003. We have gone on to develop important inline filters too, to maintain safety. Laser customers now account for 65% of our business.

Are your systems maintained?

Our team can help you with service contracts, warranty claims and replacements.